Alexander Zverev continues his ATP Finals campaign Friday as he plays Daniil Medvedev from Russia in the final round of the group stage. The reigning ATP tennis champion comes into the court after losing his previous match. Zverev was beaten in straight sets by Stefanos Tsitsipas which was quite disappointing as he did not manage to keep momentum after his win against Rafael Nadal. But, that does not draw his outstanding record as the current ATP champion. Zverev will be looking to avenge his loss in today’s game.

Daniil Medvedev, on the other hand, has had an outstanding tournament but failed to impress at the finals by losing all two games with very little hope of progressing to the semi-finals. Medvedev was beaten by Nadal on a tiebreaker in the final set in his previous matchup. Medvedev also lost four service games because of his serving weakness

Will this be a simple match for Zverev? 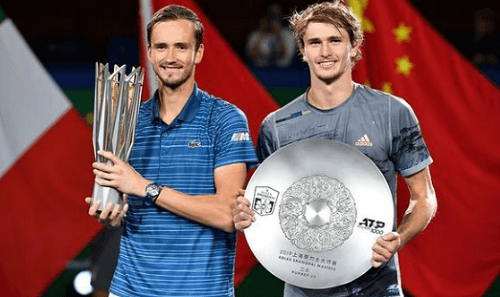 Zverev and Medvedev have played each other five times in the past. In those meetings, Zverev won four times while Medvedev only won once. The most recent matchup between the two was at the Shanghai Masters where Medvedev dumped Zverev in straights sets.

Best Pick: We pick Alexander Zverev to win this match. Zverev is a brilliant player and he’s looking to defend his title at all costs. Medvedev may have beat him in Shanghai but that was only once in five times. Not to forget to mention that he has been eliminated with no hopes that he will make the semi-finals.