It’s an all Canadian meeting as the Winnipeg Jets take on the Vancouver Canucks at home on Friday night. The Canucks travel to Winnipeg for their second half of back to back as they played Thursday. The team is really starting to improve, now ranking second place in the Pacific Division with a good 9-4-3 record on the year. This is despite losing 2-5 in their matchup against Chicago last night and 2-1 against Saint Louis before. Vancouver managed to get a record 3.47 total in goals per game while converting 21.9% in power play and killed off 88.7% of the opponents’ power play on the year. The team allowed 2.33 goals in total.

Winnipeg, on the other hand, hasn’t been much of an impressive team so far this season. The Jets only posted an 8-7-1 record on the year and are currently ranking fourth in the Pacific Division. The team also lost 2-1 in their previous meeting with the New Jersey Devils. They have a record total of 2.63 goals per game on the year and managed to convert 15.4% in power play while recording 70.6% in penalty killing. They have allowed 3.13 goals on the year. 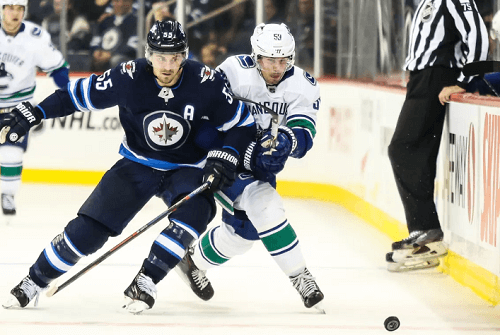 Best Pick: The Vancouver Canucks turn out to be a very surprising team this season and might win tonight’s matchup. The Jets are really struggling in defense which might cause problems with the Canucks’ brilliant offense. We doubt the Jets will overpower the dangerous Elias Petterson and Bo Hovart. Quinn Hughes is also back to full health and Tyler Myers is making his return after leaving for free agency. So, trust the Canucks to make some magic!