The Tampa Bay Lightning will be hosting the Pittsburgh Penguins tonight in their first meeting for the season.  During the last season, Tampa Bay finished 32-7-2 games at home and 44-8-0 in the Eastern Conference. Goaltenders for the team recorded a total goal percentage of .916, allowing 2.6 goals on 32.0 shots. Whereas, the Penguins finished 21-12-8 on the road and 26-15-11 in the Eastern Conference. The team scored 56 power-play goals in 228 opportunities.

Last year, both teams had three meetings, with Tampa Bay winning two of the games. In addition to that Tampa Bay had the best record in the NHL. The team won seven of their first nine games. However, this season things have turned around a little. Read all about it below! 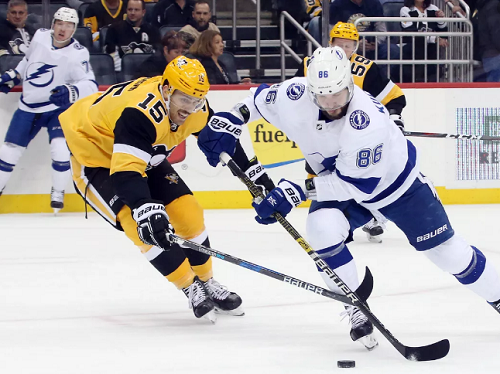 Tampa Bay Lightning didn’t have as great a start to the season as they did the in the preceding season. The Bolts are just 4-4 out, and are coming off a 6-2 loss to Colorado Avalanche. The matchup was the team’s first home game after six on the road. They fell down 2-1 in just 3:17 into the second period and failed to recover. Tonight, they will be looking to make up for that loss, playing a team which will not have had enough rest.

The Penguins had a great start this season having gone 6-4 in their first 10 meetings. But looking at their past two games, the team’s offense has struggled and that led to a recent loss 4-2 to the Panthers. Tampa Bay is a high-scoring team and if the Pens are looking to win this matchup, they will need to get their offense back on track.

Best Pick: We believe Tampa Bay Lightning will win tonight’s matchup. The team has been strong all-season last year and have beat the Pens two out of three games. Also, the last time the Bolts played was on Saturday night, whereas the Pens have had back-to-back games.