Tonight’s meeting for the Toronto Maple Leafs v Boston Bruins will be the second of the season for the two teams who went head on head for the first time on Saturday night. The Maple Leafs upended 4-3 overtime in the matchup. Tonight, the Maple Leafs (5-3-2) will visit the Boston Bruins (5-1-2) on the road.

Last year, the Bruins prevailed their first-round playoff series and triumphed in seven games. Will the Bay Street Bullies take it again tonight or will the Big Bad Bruins avenge their loss for Saturday night? Well, here’s what we think. 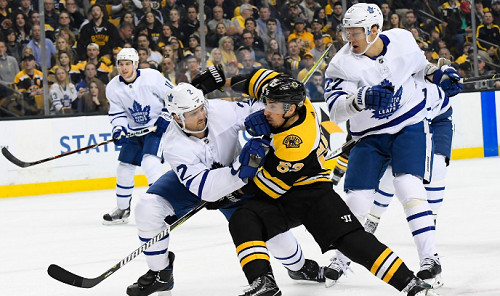 The Maple Leafs already have a road win against this season, and an average of 3.89 goals in scoring per game. On Monday night, however, the team lost 4-3 at home to the Columbus Blue Jackets. In the matchup against the Bruins, the Maple Leafs received goals from several players. Defenceman, Morgan Rielly scored two of the goals including the victory goal during overtime. Goaltender Frederick Anderson managed to make 43 saves out of a high total of 46 shots.

Despite Saturday’s loss, the Bruins received decent play from back-up goaltender Jaroslav Halak who faced 29 shots and managed to save 25. The team’s average is 2.75 goals per game this season and they fall second in powerplay percentage of 2.13 goals per matchup on the year. The Bruins winger David Pastrnak is leading the Bruins with 15 points and 9 goals. Meanwhile, Brad Marchand leads assists.

Best Pick: The Toronto Maple Leafs may have a high scoring offense, but we believe the Bruins will play well at home tonight. The team has a strong defense with and two best back-up goalies, Tuukka Rask and Jaroslav Halak who are both doing well, the team is sure to win this matchup.