Two Rugby World Cup games scheduled for Saturday in Yokohama have been cancelled due to “super typhoon” Hagibis approaching Japan. The storm which is en route is classified as a large violent cyclone set to cause violent winds across the country, potentially disrupting the pool matches. Typhoon Hagibis is said to be equivalent to a Category 5 rating on the Saffir-Simpson Hurricane Wind Scale. Read more on the story below. 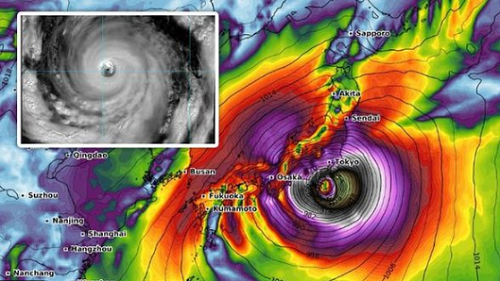 A Statement from World Rugby and Organisers

On Thursday, World Rugby and the Japan Rugby 2019 Organising Committee announced an update with regards to the impact Typhoon Hagibis would have on this weekend’s World Rugby fixtures. This included cancelling two matches initially scheduled to take place on Saturday; that’s the crucial final group match between England and France as well as New Zealand v Italy.

“This is a complex and dynamic situation which we have been monitoring extremely closely with the assistance of our weather information experts. We are now in a position to accurately predict the likely impact of Typhoon Hagibis on Rugby World Cup fixtures this weekend,” said Alan Gilpin, World Rugby Chief Operating Officer and Tournament Director.

“While making every possible effort to put in place a contingency plan that would enable all of Saturday’s matches to be played, it would be grossly irresponsible to leave teams, fans, volunteers and other tournament personnel exposed during what is predicted to be a severe typhoon.

“As a result, we have taken the decision to cancel some matches in order to ensure the safety of all involved. It is the right thing to do, and comes with the support of all stakeholders, including the teams,” Gilpin added.

Each team, however, will be awarded two points, as part of the competition rules.

Other Weekend Matches to Take Place

Fans with tickets to the cancelled games will fully be refunded the face value of their tickets.

“We fully appreciate that England, France, New Zealand and Italy fans will be disappointed, but we trust they will appreciate that their safety must come first. They will be entitled to a full refund on their match tickets.

“Our message for all fans in Japan for Rugby World Cup is to heed all official advice, stay indoors throughout Saturday and do not attempt to travel on the day,” said Gilpin.