The Montreal Canadiens are on the road to face the Buffalo Sabres tonight. The team climbed back from a three-goal deficit and recorded a 6-5 win against the Maple Leafs in a shootout on Saturday. Tonight’s game marks as the third consecutive road game for the team who be making their 2019-20 home debut on Thursday.  Whereas on the other hand, the Sabres just lost to the Blue Jackets 4-3 on Monday. 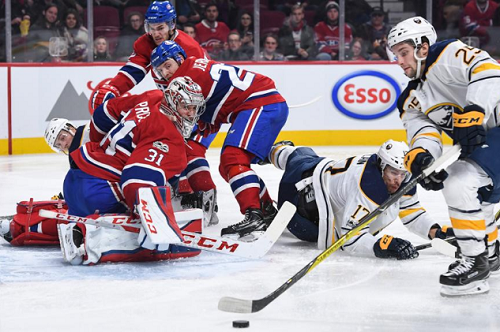 Here’s our take on tonight’s game.

The Montreal Canadiens are off to a great start for the 2019-20 season. They’ve just won the latest contest against Toronto last weekend. The team also picked up a 7-4 win at home on March 23 this year. The Canadiens tied for 8th in the NHL in scoring as they have made four goals a night so far this year.

Whereas last season, the Sabres took three of the four contests they had, even though two came in overtime. The Sabres recently lost to the Blue Jackets in their matchup on Monday. So, the team will be looking to avenge their loss on tonight’s game. They are currently tied 7th in the league in goals against this year.

Here are a few points to consider before making your prediction:

Our best pick would be that the Sabres will win tonight as the team seeks redemption after their loss on Monday. Overall, they’re a good team and have beat the Canadiens a couple of times before and can do it again.