The Detroit Red Wings are on the road to face the Ottawa Senators for an Eastern Conference clash tonight. The Red wings come into the matchup with a 3-5 record after losing to the Oilers 2-1 on Friday night. Tyler Bertuzzi pitched an assist for the lone goal which was scored by Mike Green.

Meanwhile, the Ottawa Senators enter the game with a 1-6-1 record. They’ve just lost 2-1 to the Dallas stars playing on the road. Forward Vladislav Namestnikov contributed to the goal, which was his fourth this year. In the last four meetings, Ottawa only managed to score six goals.

Both teams might not even make it to the playoffs, not to mention how they are off to slow starts. But who’s winning tonight? 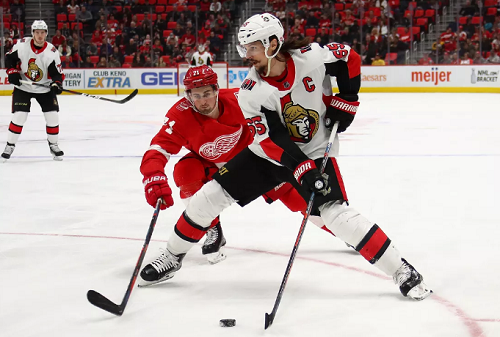 In their last meeting with the Oilers, the Red Wings were solid at keeping the team off the scoreboard holding the team 2 goals on 37 shorts. Starting goalie for the Red Wings, Jonathan Bernier recorded a good total of 35 saves which improved his save percentage for this season to .905 and GAA record to 3.02. The Oiler beat the team 28-26 in the faceoff circle. Detroit has very little in their offense and the goaltending is also not solid. On Tuesday night, the team lost 5-2 to the Canucks at home. This was the Red Wing’s fifth loss in a row this season with only a total of seven goals and allowing 22 goals.

Ottawa is also not one of the strongest links in the NHL. The team has only produced the second and fewest points in the league in 2016/17 when they made it to the Eastern Conference finals. In addition to that, the team only has 131 points in total combined for the last two years. Meanwhile, teams such as Tampa Bay Lightning had 128 points in the last season alone.

Best Pick: We will have to go with the Detroit Red Wings on this one. The team lost all of their five last meetings, so they will be looking to avenge that. And in this case, they’re not facing such a strong opponent. The Detroit Red Wings have a pretty talented line-up for this game with Tyler Bertuzzi, Anthony Mantha, Dylan Larkin and backup goalie Jonathan Bernier.