The defending NBA champions, Toronto Raptors take on the New Orleans Pelicans at home tonight as the 2019-20 NBA season begins. The Raptors finished last year’s season with a 58-24 record and won the championship. This year, the team has a way different lineup with the departure of player Kawhi Leonard whose exit lowered their chances of defending the trophy to 17-5.

The Pelicans, on the other hand, have a 33-49 record and started on a four-game winning streak last year. The team hopes to get off to the same start this season having star player Jrue Holiday in the lineup together with Lonzo Ball, Derrick Favors, Brandon Ingram and JJ Reddick. Last season, Holiday had 21.2 points on average per game and 7.7 assists.

So, who is it going to be on tonight’s game? Read on for more! 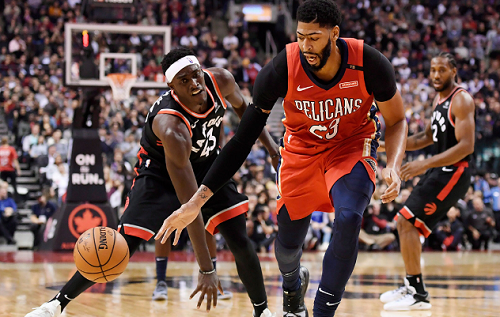 Although the New Orleans Pelicans had a decent start last season, things failed to go their way after their four-game winning streak. They finished the season 3rd in the conference in scoring offense with 115.4 points each contest. In scoring defense, the team tied for 27th with 116.8 points per game. Coach Alvin Gentry will be returning for the 5th time as the team’s coach and hopefully with Holiday as the anchor for the team will perform well. High draft pick Zion Williamson is out for a period of weeks due to knee surgery.

The Toronto Raptors, on the other hand, may have lost Leonard but they will be looking for other top players to step up. The projected lineup for the team includes the likes of Kyle Lowry, who just agreed to a one year, $31M extension with the Raptors after averaging 8.7 APG last season. Others include Pascal Siakam, Norman Powell, Marc Gasol and OG Anunoby. Siakam had an average of 17PPG. Nick Nurse will return for the second season as the team’s couch. Toronto finished 8th last season averaging 114.4 points each contest.

Best Pick: We go with the Raptors to win tonight. The team has a very promising line-up and they won the championship last season for a reason.