In the NHL, the Philadelphia Flyers have shown that they can win the Stanley Cup. However, they haven’t won a title since 1975, placing them in the lower betting odds brackets. While the team has some good players, they just can’t seem to figure out the right strategy to win.

Of course, this could also be attributed to stronger teams in the league and Eastern Conference as well. So, should you take a gamble on the Philly Flyers? Let’s find out.

Based on statistics, the Flyers have what it takes to get to the final but they have a 0.25 success rate. Further, they’ve won eight conference finals on 12 tries. Putting them on a 0.667 success rate.

Still, they’ve never won the President’s trophy, but there is a chance that they’ll win the Cup in 2020. This is good news if you’re a Flyers fan, and if you’re planning to bet on the team. However, we’d recommend taking some side bets, not just a future on the Stanely Cup. 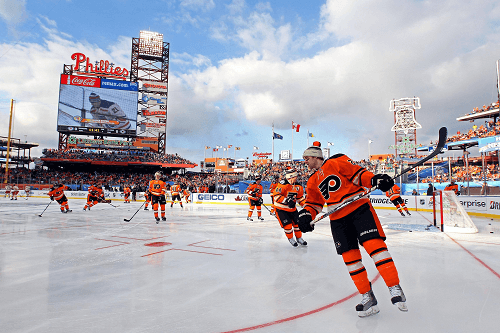 Trending bets show that the team isn’t in the top picks, but they have more than a 50% chance of making it to the Cup when the NHL season resumes. Although we wouldn’t bank on it.

So, bet carefully on specific players and parts of the next few matches. According to our sources, they have a 99.9% chance to get to the Stanley Cup playoffs. And a 12.7% chance to actually win the Cup while factoring in their game winning streak.

Under the coaching of Alain Vigneault and general manager Chuck Fletcher, the team is on an up. Their regular-season games are showing a strong trend in wins and a better strategy overall.

The Philly Flyers are definitely focusing on the offensive, but their defense is also improving. We’d recommend taking a chance on over/under totals for even money. They don’t have a league lead currently, but who can predict the NHL, really?

Since joining the ice hockey league in 1967, the Philadelphia Flyers have had some significant title wins (listed below). Still, there have been a lot of droughts. So, watch the save percentage, puck drops, and home ice at Fargo Center odds carefully.

So, here’s how the team has done since it started: