The UEFA Champions League is one of the biggest annual soccer competitions contested by the best European soccer clubs. It was introduced in 1955 as the European Cup and remains as one of the most favoured soccer tournaments by fans and bettors alike. The European Championship attracts millions of viewers every year and the numbers continue to grow. Popular teams in the league include; Real Madrid, Liverpool, Barcelona, Man United, Tottenham Hotspur Milan and others.

WHAT YOU WILL FIND IN THIS CHAMPIONS LEAGUE GUIDE

The 2019 UEFA Champions League soccer was the 64th season of the tournament which took place on June 1 2019 at the Wanda Metropolitano in Madrid. Liverpool claimed victory and took home their sixth European Cup and second of the Champions League era. The club now ranks third behind legends Real Madrid which currently holds thirteen titles and Milan with seven. It surpasses Bayern Munich and Barcelona each holding five titles. The team will go head-on with Chelsea, the champions of the Europa League in the UEFA Super Cup 2019. 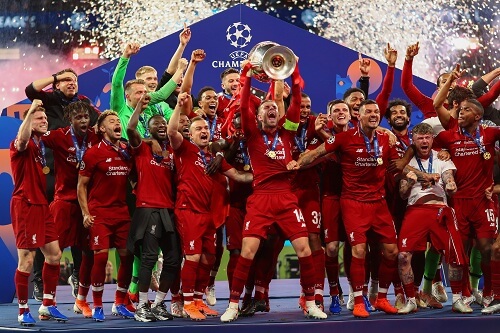 The Champions League is seen as the ultimate prize in European club soccer; hence it has created huge interest in the competition. During the UCL season, Canadian bettors are provided with an enormous amount of betting opportunities on Champions League matches. There are dozens of markets offered for each game. At our highly recommended sportsbooks, you will find the best Champions League betting odds and lines for Canadians. Like many CA bettors, you can prove your soccer knowledge by placing wagers on our favorite sportsbooks. You can bet from anything to everything including Champions League outright odds, match result, double chance, over/under bets, handicaps and a whole lot more. You can learn more about the different wagers on our soccer betting guide.

Throughout the season, there are various Champions League draws that take place. this is before and also after the group stages. For instance, even before the play-off round there will be three qualifying rounds. Thereafter there will be three more draws for the last sixteen, quarter and semi-finals. The 2018/2019 Champions League draw was held on August 30 2018 in Monaco.

To make most of your Champions League picks and predictions you will need as much soccer knowledge as you can. You can start by learning the different types of bets that you can place on our soccer betting guide as previously mentioned. Once you’ve familiarized yourself with the wager types you will need to start with the type of bets that you’re most comfortable with. Popular soccer bets include parlays which are simply multiple selections on a single bet slip. But these can be tricky for beginner players as when a team loses you lose the entire wager. You might want to start with single bets as they are a bit simple to get right although the payout is not as huge as parlays and accumulators.

More so, do your research on the teams you wish to bet on. Check latest Champions League news for injuries, retirements and all other relevant information to help you make informed wagers. Don’t forget to make use of the strategies we feature on our site. As a bonus, we’ve provided you with a list of previous winners to help you with your predictions.

A list of Champions League champions ordered by most titles won: