The San Jose Sharks are visiting the Montreal Canadiens in Quebec for an interconference clash on Thursday night. Last year, the Sharks went 46-27-9 overall while going 21-16-4 on the road. The team had a record of 289 goals, 57 on power plays and nine shorthanded. Whereas, the Canadiens went 44-30-8 overall and 25-12-4 at home. Montreal had a record of 246 goals in total with a 3.0 average per game.

Tonight’s meeting will be a first for the two teams this season and here’s how we think it will go. 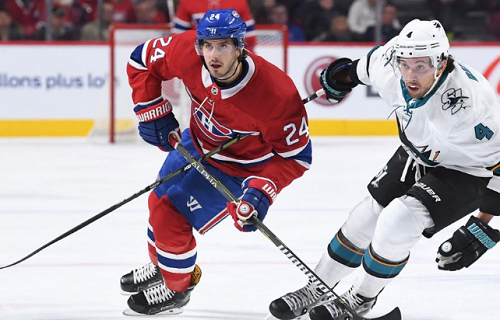 The matchup will be the Sharks’ second game of a five-game road trip. The team recently lost 4-3 overtime in a game against Buffalo on Tuesday night. Meanwhile, Montreal was knocked 4-3 on the road playing against Minnesota Wild on Sunday. The last eight meetings between the Montreal and the Sharks was taken by the Sharks, with the most recent matchup in March 7, 2019. San Jose beat Montreal 5-2 at home. This season, however, the San Jose Sharks struggled on the road. The team enters tonight’s matchup with a record 1-3-1 in their last five road games and have only scored 12 goals in those meetings.

The Canadiens will be seeking to avenge their eight-straight loss to the Sharks plus their recent loss to Minnesota on Sunday. The team won 5-2 to the St. Louis Blues a day before. This season, Montreal is 2-2 at home and has scored 13 goals in those contests. Tonight, the team turns to goalie Carey Price, which is a very big advantage for them.

Best Pick: We believe the tables will turn tonight. The San Jose Sharks will not be getting their ninth straight win. The team hasn’t been playing well on the road, not to mention that they must be tired from Tuesday’s matchup. Montreal has a big chance with Price on board, the home advantage and seeking to come back in the win column. Count on Montreal Canadiens to win this one.