The Vegas Golden Knights have become an extremely popular NHL team to bet on since joining the world’s best hockey league in 2017. In their first season, the team nearly made some plucky Canadian future bettors very rich by making it all the way to the Stanley Cup finals but were then defeated by the Washington Capitals. Since then, sports betting sites in Canada have kept Vegas Golden Knights odds to make playoffs quite favorable despite the team’s extremely unpredictable nature.

If you would like to learn more about betting on the Vegas Golden Knights, you have come to the right place. Below we have a good look at all bettors need to know about betting on the pride of Vegas, such as their odds to win the Stanley Cup this year and their overall performance history. So, read on and find out all you need to know about wagering on the Vegas Golden Knights online in Canada.

While the Vegas Golden Knights currently have a very short history in the league, it has been filled with relative success. In their first season, they made it to the Stanley Cup finals and in their second, they at least made it to the First Round of the playoffs. At the very least, this suggests that the team may be a good pick to make it to the playoffs this season, especially as they were able to keep their hands on some star players, such as Marc-Andre Fleury. 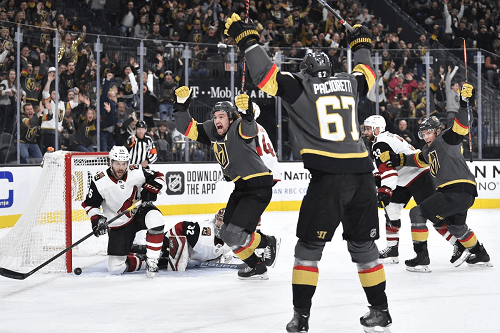 At this point, we have nearly reached the halfway mark of the season, and it does seem as if the Vegas Golden Knights are at the very least in line to make it to the playoffs in a wild card spot. Their record has been pretty even, with them picking up one win for every loss. While this probably isn’t pleasing Vegas fans, it is probably a sign that the team has some potential to pull off some surprises when on form.

Overall, we don’t think they’re a bad bet for the Stanley Cup this year. They have got odds that could reward Canadian bettors with a favorable sum should they be right. However, that said, we do think that bettors should rather have a good look at other power players in the league this year, such as the Washington Capitals, Boston Bruins and New York Islanders. If performances are anything to go by, it may be a good idea to favor an Eastern Conference team this year.

As mentioned above, the Vegas Golden Knights do not have a long history in the NHL, only having been formed in 2016 and joined the league in 2017. In their few seasons in the NHL, they have managed to make it to win the Pacific Division and Western Conference championship once in 2018 (despite being predicted to be one of the worst teams in the league at the beginning of the season.) They also have a 100% record of making it to the playoff round.

In their lone Stanley Cup finals appearance, the Vegas Golden Knights won only one game in the series against the Washington Capitals. They bested the Capitals 4-6 in the first game of the Cup in Las Vegas. The Capitals then hit back with a four-game winning streak to take their first-ever title.

It seems that the stage is primed for the Golden Knights to get a Stanley Cup win early in their career. With coach Gerard Gallant posting a win percentage near 60%, it may come sooner than many Canadian hockey fans would like to believe.

Before placing a bet on the latest Vegas Golden Knights odds, you may want to have a look at some of these overall team facts: