The Lightning are quite a good NHL team and have been holding their own. They’ve managed to hold on to the second spot in their division. In fact, some sportsbooks have them at number three in terms of their odds of winning the Stanley Cup, the NHL’s championship trophy.

Throughout their existence, the Tampa Bay Lightning haven’t been the worst team in the league. They’ve made Division Champions four times, Conference Champions twice and won the Presidents’ Trophy and the Stanley Cup once. Currently, they’ve managed to secure themselves a spot in the Wild Card playoffs in the Atlantic Division.

Tampa Bay is affectionately known as the Bolts by NHL betting fans. They call the Amalie Arena in Tampa, Florida their home ice and are cheered on by ThunderBug, a yellow anthropomorphic bug. The team uniform has a lightning bolt logo, while their primary colors are Tampa Bay blue and white.

Betting on the Tampa Bay Lightning

Betting on the Tampa Bay Lightning is a good bet to go if you’re looking at their divisional performances. Their performance in the playoffs isn’t all that bad, recording a 14-10 record since 1992. Tampa Bay Lighting standings for the 2019-20 season are also pretty good. However, even though they’re second in their division, anything can happen in the Wild Card round.

To bet on Tampa Bay, look for Lightning NHL games at your favorite Canadian sports betting sites. There are some great odds and betting lines on the Tampa Bay Lightning. 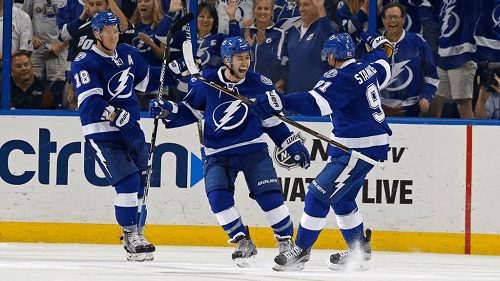 Tampa has had a consistent season so far. Looking at the odds at one of our top CA sportsbook – Intertops – they say the odds of the Lightning taking the Stanley Cup at +800, which is third on the list.

Intertops have set the odds of Tampa winning the Eastern Conference at +500, which is also third on their list. While the odds of them winning the Atlantic Division are +185 which places them second in the sportsbook.