The American Football Conference, AFC for short, is one of the National Football League (NFL) conferences which sports betting enthusiasts love betting on. The NFL, as you may already know, is the highest qualified level of American football in the US. Both the AFC and National Football Conference (NFC) host 16 teams each and make up the 32 football teams of the NFL, which are organised into four divisions.

The conferences come as part of the merger that occurred in the 70s with the rival American Football League (AFL). To form the AFC, ten former AFL teams were combined with three other NFL teams, and the NFC was formed with the 13 remaining clubs from the NFL. There are 16 clubs in each conference today as a result of many other developments since the merger.

At the best Canadian bookies, punters have an opportunity to access the best AFC betting odds, as well as lines on NFC teams. You can bet on any of the American football teams that we mention in the following sections at the best NFL betting sites. Read on to get started!

THE REGULAR SEASON FORMAT IN THE AMERICAN FOOTBALL CONFERENCE

In the American Football Conference, the 16-game regular season in which the teams compete is set using a pre-determined formula. During the regular season, the AFC teams compete twice with other teams in their division. They play home and away. The NFL also assigns ten games to the football teams in which two of them are based on the final divisional standing of a team in the previous season, and the other eight are split between a schedule of two other divisions in the NFL. When the season ends, two wild cards and four division winners in the American Football Conference qualify for the playoffs which then conclude the AFC Championship Game. A stunning Lamar Hunt Trophy is awarded to the AFC champion, who then also plays the NFC Champion in the Super Bowl! 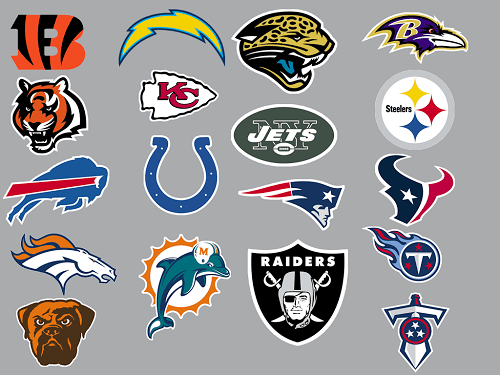 In the AFC, the 16 teams are organised in four divisions; East, West, South and North. Each of the divisions hosts four teams.

Join a sportsbook on our list and start betting today!