On Thursday night, the Indianapolis Colts travel to the NRG Stadium to face the Houston Texans for first place in the AFC South Division. The Colts come off a 33-14 win against Jacksonville at home on Sunday. Whereas, Houston was dumped 41-7 on the road by the Baltimore Ravens. Indianapolis leads the all-time regular season series with a 27-8 record and has succeeded in all their last five games. This includes a 30-23 victory at home in their most recent matchup on October 20, 2019. 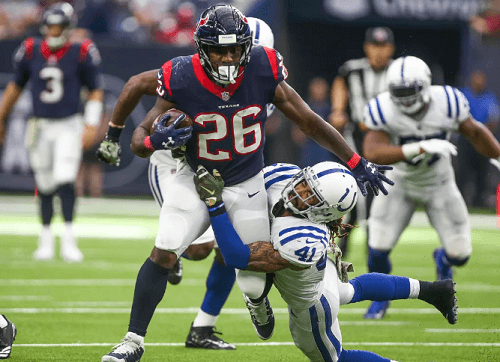 The Indianapolis Colts currently boasts a 6-4 record, sitting atop of the AFC South. They come off an impressive win against the Jaguars and will look to keep the same energy and win the division title. The Colts lost two of their last three games; one to Pittsburgh and the other to Miami. Quarterback Jacoby Brissett got injured in the game against Pittsburgh and missed Miami with the knee injury. He, however, returned to knock out the Jaguars. The team has won most of their games with the QB in play. In their game with the Jaguars, the Colts ran the ball 36 times for 264 yards with Jonathan Williams (13 carries, 116 yards) and Marlon Mack (14 carries, 109 yards) each going over the 100-yard mark on the ground.

The Houston Texans also come into the match up with a 6-4 record and will be looking to rebound after their terrible performance against Baltimore. The team’s offense was extremely awful and even struggled to handle Lamar Jackson and the whole Ravens’ offense. The Texans also had a lone score two turnovers into the game on a 41-yard touchdown by Carlos Hyde. The match was Houston’s biggest loss since a 45-7 defeat against the Jaguars on Dec 17, 2017.

Best Pick: Division matchups are always a tough call, but we have to go with the Colts on this one. The team has been solid this season and with Brissett back on, they’re sure to deliver a spectacular performance. The Texans, on the other hand, have struggled to get a pass rush since J.J Watt was out on injury, giving the Colts even more dominance in the offensive line.