The Arizona Coyotes head for an interconference matchup with the Buffalo Sabres on Monday. The Coyotes come to the game after beating the New Jersey Devils 5-3 on the road on Friday night. Buffalo won 2-0 to Detroit in the second game of a back to back situation on the same night. The Sabres have claimed victory in four of their last five meetings, including from last year. Meanwhile, the Coyotes have won five of their last six meetings. Both teams have lost one of their five last matchups, making tonight’s match even harder to predict. But here’s what we think will happen. 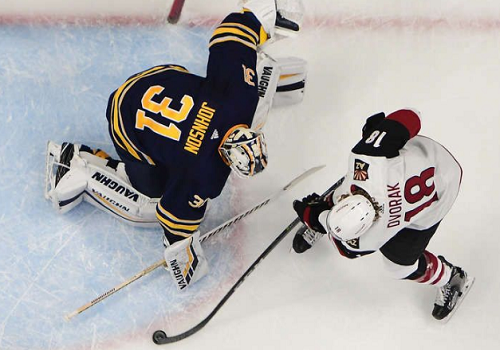 Arizona comes into Monday’s matchup with an overall record of 6-3-1. In their last matchup with New Jersey, left-wing Michael Grabner, Barrett Hayton, Oliver Ekman-Larsson, Clayton Keller and Nick Schmaltz contributed to the win with one goal each. Meanwhile, goalie Antti Raanta managed to make 32 saves on the 35 shots that he faced. Schmaltz leads the offense with 11 point and 7 assists which also lead the team. Goaltender Connor Garland took only 18 shots of the year and has scored 5 goals.

The Sabres enter the matchup with an overall 9-2-1 record after beating Detroit. Buffalo is considered one of the best teams in the NHL, according to the standings. Jack Eichel leads the offense with a high record of 16 points, six goals and 10 assists. Three of the goals scored by the center come in power play and five of the assists come on man advantage. Goalie Carter Hutton also has an impressive record of 6-1-0 plus two shutouts and an average of 2.27 goals against. Meanwhile, the backup goalie Linus Ullmark averages 2.56 and has recorded 3-1-1 and one shutout this season.

Best Pick: Buffalo has a slightly better record compared to Arizona. It’s also an advantage that the Sabres will be playing at home, in addition to having pretty good offense coming in power play, which we believe will work against Arizona.